The study was carried out on Brutian Pine (Pinus brutia Ten.) seedlings from the seeds originated from Dosemealti seed orchard (TB19) (P2) established by Bucak (Uludere) provenance and Duzlercami seed orchard (TB8)(P1) established by Golhisar (Evciler-Kocas) provenance, grown in Burdur-Gölhisar forest nursery. The seedling of the orchards of the species were sampled at 1 + 0 year to compare in terms of some morphological characteristics (seedling height, root collar diameter, root length, side branch, bud, root and needle numbers) at the nursery. According to the results of the variance analysis the seed orchard populations were statistically similar (p>0.05) in terms of seedling length and root collar diameter, while the populations had significant differences (p <0.05) in terms of root and bud numbers. As a result of the correlation analysis, generally significant (p<0.05) positive relationships in terms of morphological features were determined. In addition, the sturdiness index of the seedlings was calculated in the light of the measurements obtained. The most effective factors in the context of the sturdiness index were the length of the longest root and the number of buds, respectively. In terms of seedling quality classes of the Turkish Standards Institute (TSE), 56%of the seedlings were 1st class, 22%were 2nd class, 22%were unsuitable for planting in P1. In the P2 population, 84%of the seedlings were 1st class, 10%2nd class, 6%unsuitable for planting. As a result, it was determined that the seedlings originated from Bucak (Uludere) showed higher growth performance in terms of both morphological characteristics and TSE seedling quality than Golhisar. 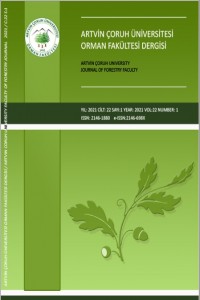